Sequels generally disappoint people by the time they are announced. As a regular film goer, you go through them like your pack of pop-corn. When they are of the summer blockbuster variety, you typically, leave your mind at home and just see them. When they occur for movies which were sleeper hits, you tend to sit up and take notice. Why would an idea which had little juice in the first place, get another shot at celluloid (pun intended)? 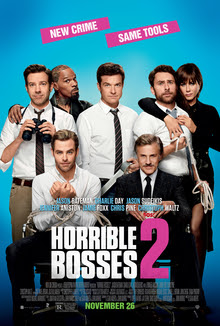 Horrible Bosses 2 gets some things right- Jason Bateman continues his deadpan and matter-of-fact acting, continuing in the same vein as Arrested Development; Jennifer Aniston playing the sex-addict doctor; and Chris Pine as the handsome devil. Apart from this, certain gags do get you- the scene where a runaway car waits past a train crossing because they don't want to leave the police behind, is, in the true sense of the word, hilarious. Apart from that, the only thing keeping one hooked is the presence of high and might actors in guest roles- there's Mike from Breaking Bad, Christoph Waltz and Kevin Spacey.

The parts the film doesn't do well, it plumbs the depths of inefficiency. The other two leads, Charlie Day and Jason Sudekis gnaw at your sense of humour, so desperately they try to elicit laughs. Charlie as the lovable fool only succeeds in being the latter. This movie may go down as one of the biggest wastes of available acting talent (both leads and guest stars) in history.