August 31, 2011
Innovation in advertising is a very narrow term. It refers only to things that haven't been done before, or ideas that haven't been expressed in a certain manner. It doesn't solve problems except one- to push more units of the product your client makes.
It remains important for us to look at innovation in real life- in products and services that impact us on a daily basis. It becomes imperative- As a marketer, brands that indulge in innovation are those who are taking center stage today. Nokia's throne was dismantled by multiple small companies like Micromax, Lava and others- who used three factors together- the has-to-have-an-IMEI law, the ability of Chinese companies to mass produce 'decent' phones in large numbers, and use newer technology in the mobile software and hardware  to churn out new models. On the top end, Apple's innovation and Android's ceaseless copying of the Apple's features and looks, has almost killed Nokia as a brand. Nokia today is facing this challenge globally- Sales are plummeting. Their partnership with Microsoft, a long time laggard in the mobile hardware sector would only add to their miseries in the long term.
Coming back home, India has always faced a unique set of challenges- widespread poverty, indifferent innovation standards, and the inability to scale any innovations that might come through due to lack of an angel investor culture in the traditional economy. Businesses are too busy minting their cash cows, and only want to make acquisitions when said innovations acquire some scale.
The innovation challenge begins from the very top. In a very interesting article on pagalguy.com, a MBA portal, the following information throws up some startling stats-

According to annual figures published by Batelle – R&D Magazine, India lags substantially behind China in its annual R&D spend. India’s Gross Domestic Expenditure on Research and Development (GERD) after factoring Purchasing Power Parity was US$ 28.1 billions in 2009, which increased to US$ 33.3 billions in 2010. In comparison, China spent more than four times that of us at US$ 123.7 billions in 2009 and US$ 141.4 billions in 2010 on R&D.
The UNESCO Institute of Statistics reports that between 2000 and 2004, India had a research manpower count of 119 researchers per million people compared to China’s 708 and USA’s 4,605 per million people.
The Shanghai Jiao Tong University’s (SJTU) Institute of Higher Education which conducts the annual ‘Academic Ranking of World Universities’ using empirical data from science and social science research citation indexes as its sources ranks Bangalore’s Indian Institute of Science in the 300-400 range and the Indian Institute of Technology, Kharagpur in the 400-500 range. No other Indian institutes, whether the IITs or IIMs, feature in its top 500.
The article was about the comments by Minister Jairam Ramesh, on the quality, or lack thereof, of teachers in the IIT's and IIM's.

While we receive sporadic reports about the innovation in certain areas of the economy, there are some reasons why India has not seen a sustained innovation culture. 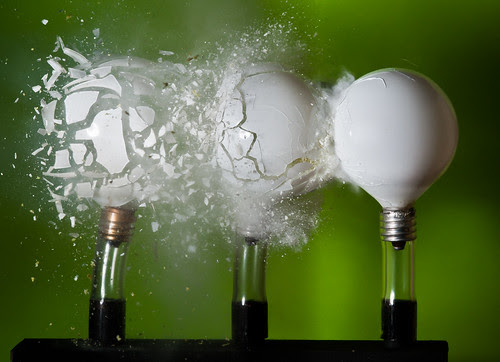 1. Lack of an 'Innovation Atmosphere'- Angel Investors and Venture capitalists exist in categories and business categories that are out of the realm of most Indian companies. Venture Capitalists look for a certain kind of pedigree, a breed of entrepreneur who can do term sheets, provide financial information that is akin to providing an investment banker the details of their life, and such arcania. This means most innovators do not get access to the kind of early stage financial support they need to scale up their ventures.

2. Lack of Media Savviness: While the proliferation of media has meant some entrepreneurs get coverage, the large majority only come to light once they have achieved some scale. Economic Times, the country's most read Business Newspaper, does a column named Starship Enterprise. A cursory glance at the series shows Entrepreneurs get into the column once they've started doing a turnover of 4 Crores+. This number, while very low when we compare it to western start-ups, means exposure to aforementioned VC's is only after you've made something of your own.

Also, innovators in most cases come from either of the two backgrounds- IIT/IIM/Premier Engineering Colleges, and those who rise from the ground up, looking at and solving challenges they see in their immediate surrounding. And they don't have the savviness to get to the media with their innovation. And their dreams, die a sudden death, due to one most important characteristic of the Indian Innovator-

3. Social Structures: This brings about two important things to the table-

Most people would still do things as they are prevalent in the society around them- so it was becoming an Engineer 10 years back, and it is doing an MBA today. Exceptions are far and few between, and that's the reason we recall them- the majority of our most talented people are stuck in jobs that require some amount of understanding and communication skills. Risk taking ability in this scenario is minuscule, and their any latent talents remain dormant. Most Entrepreneurship efforts that one sees, is in spaces that the said Entrepreneur was already employed in, so it is a forward integration of skills, and a client base that's ready to deal with you.

The second point is surprising and worrying at the same time. Entrepreneurs would ideally
stake all that they have in their kitty on making their dream work. With India's established family structure, one would think there would be more entrepreneurial ventures, but there are lesser. Given our population base, and the large number of engineering graduates, one could hope for a much larger base of ideas coming up. What we have rather, is an army of code writers.

The way forward is promising, but remains clouded by these issues. Organisations such as TiE are solving parts of these problems, but they would stare us in the face till we have what we really need- fearlessness.