Dark Days, but Smiles across the Oceans 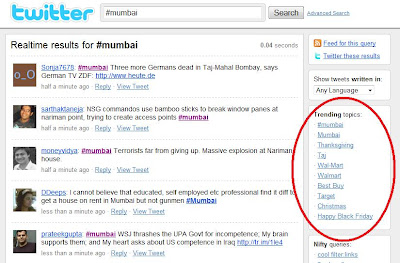 Ok, so the title is very ambiguous. Let us clarify. Since like most Indians we are bound to follow the events in Mumbai on the news channel. Since most of them are going on about minute-by-minute reporting, we thought to move on to our own news sharing platform- twitter.

There was something very interesting to note once we got beyond the oh-my-god-another-rumour phase. Twitter search enables you to see the top trending topics. Another day and time and things would have been ok, but this is amazing.

The top three topics are of known importance at this time. Thanksgiving is an occasion celebrated across the hemisphere. And hence its mention in tweets across the board are fine. Its where WalMart came in that we were perplexed. And the curiousity, even in times like these, got the best of us.

The tweets, all of them about the only non-essential topic within the top 5, is about the things people are getting to see on Black Friday.

Black Friday is not an official holiday, but many employees take the day off, which increases the number of potential shoppers. Retailers often decorate for the Christmas season weeks beforehand. Many retailers open very early (typically 5 am or even earlier) and offer doorbuster deals and loss leaders to draw people to their stores. Although Black Friday, as the first shopping day after Thanksgiving, has served as the unofficial beginning of the Christmas season at least since the start of the modern Macy's Thanksgiving Day Parade in 1924, the term "Black Friday" has been traced back only to the 1960s.

The term "Black Friday" originated in Philadelphia in reference to the heavy traffic on that day. More recently, merchants and the media have used it instead to refer to the beginning of the period in which retailers are in the black (i.e., turning a profit).

The news media frequently refer to Black Friday as the busiest retail shopping day of the year, but this is not always accurate. While it has been one of the busiest days in terms of customer traffic, in terms of actual sales volume, from 1993 through 2001 Black Friday was usually the fifth to tenth busiest day. In 2002 and 2004, however, Black Friday ranked second place, and in 2003 and 2005, Black Friday actually did reach first place. The busiest retail shopping day of the year in the United States (in terms of both sales and customer traffic) usually has been the Saturday before Christmas.

In many cities it is not uncommon to see shoppers lined up hours before stores with big sales open. Once inside, the stores shoppers often rush and grab, as many stores have only a few of the big draw items. Electronics and popular toys are often the most sought-after items and may be sharply discounted. Because of the shoulder-to-shoulder crowds, many choose to stay home and avoid the hectic shopping experience. The local media often will cover the event, mentioning how early the shoppers began lining up at various stores and providing video of the shoppers standing in line and later leaving with their purchased items. Traditionally Black Friday sales were intended for those shopping for Christmas gifts. For some particularly popular items, some people shop at these sales in order to get deep discounts on items they can then resell, typically online.

We have a lot of things to say about this. Since they fall outside the purview of this space, we shall let you do your own thinking.

Happy Thanksgiving. Our prayers for the people in Mumbai and the worldover who are affected by this tragedy.
Black Friday Mumbai Blast Victims Mumbai Blasts Oberoi Taj Thanksgiving Twitter #mumbai Twitter Mumbai