October 11, 2008
You and me have been using Orkut and Facebook for some time now. We've met friends, acquaintances and office colleagues from the past. The wars have been fought and lost. They all exist with equal elan in a market that's no one's for the taking.

The war in the world outside India is being fought in a different universe. Outiside of Brazil and India, Orkut is a very old-world establishment. The apps that it came out with during the past few months have been present on facebook for atleast a year. Hence, users have made facebook the app of their choice.

But facebook's numero uno status is being challenged. By brevity. Twitter is attempting to take them to the cleaners. With a short 160 character message that lets the world know what you're upto, Twitter combines social networking with micro-blogging, and takes the entire universe of facebook to another level.

So facebook is swaying. And their marketing and senior management is thinking. Thinking hard.

So facebook is going mad. They don't know where to go, what to do. Nail biting, Karl Zuckerberg comes to visit his baba (spiritual guru, you naughty people) right here in India. And I think he gets some advice. Now, marketing advice from a spiritual guru can be enlightening. Knowing their success in India, they know the pulse of their target audience.

So the baba asks: बेटा, क्या करते हैं सब लोग ट्विट्टर पे? (What do users do on Twitter?)
KZ (flummoxed by the way the baba twangs his way to twitter) replies: I really don't know. I gave them a widget and an app for everything that a six-year old can think of. But people, they are bent on sending each other texts about what's up in their life. I mean, how base(ic).

Baba (now unable to understand the fancy accent), asks his assitant to show him this problem face to face. Baba remembers his days of marketing counterfeit goods maybe. And tells Zuckerberg a trick in secret. Zuckerberg has a sudden calm epiphany (oxymoron, for everything else in this conversation is).

His eyes light up, he catches the next flight back and comes to the office. He looks refreshed, the dark circles are gone. And he's got the team together.

Zuckerberg: Let's get this baby rolling. Open up the trenches and show me the enemy's position. 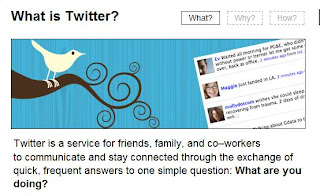 They look at the screen, they see Zuckerberg. There's this storm brewing in his eyes, probably an overhang from the Star Frappe from the flight.
All of them look intensely at him. He whispers something. They come in closer to listen to him. Suddenly, there's this great cosmic transfer of ancient wisdom from the sages to the facebook team. All of them feel the warmth returning back to them. A couple of gofers are dispatched to Starbucks for their decaf Lattes. The office is decorated with the message of the day- The Guru is supreme! Balloons in the shape of birds are blown up, for they now have the ability to surpass every thing that there is.

The apps team is set hard to work. This will be facebook's newest feature ever. It will change the way the users engage with the brand. The internet will never be the same again. Facebook launches the revolutionary feature-

The Power of right now! All this while, Twitter has been beating them over the bush with their tweets which answer a single question. This is their USP, their business plan. Coupled with the ability to integrate Web, SMS and paired devices, Twitter is what most people, short of time, use.
So faceboook has an answer. Right Now. They add the words to twitter philosophy, make it the prime piece of rib on their platter. Now since most people have been lapping up the jalapenos, the bell peppers and all but bathing in the sauce, they'd love the cherry topping too.

Too bad twitter had it first. We are facebook, we are mighty, what if we don't have a fresh idea. We'll do what is needed to win. Even if it means copying the strategy of our competitor right off. Even if the idea struck them first.