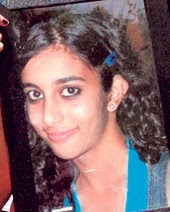 The Aarushi murder case has everyone up in arms. I have seen coverage in everything from news channels to glossies, taken part in SMS polls on news channels, read features in city supplements about how family dinners have turned into battlefields ala Kyunki discussing who murdered her?

Just one story that covered the servant who was also killed, and hasn't even been mentioned. A Psychatrist was quoted saying people disassociate themselves with the servant since they earlier thought of him to be the killer, and now they feel guilty about it.

Not to bore you with details but the coverage bears scrutiny. Especially since atleast two channels have been served Showcause Notices over their character assasinations of Dr. Talwaar and that of Aarushi.

This case assumes more importance than the Prince case, and will be discussed in more media classes than others. The media's frenzy to cover the case has resulted in top cops bungling entire investigations and shooting themselves in the foot. It has resulted in the state CM to call in the CBI. Its another thing that the CBI has bigger and better things to do, which it still bungles.

So who's playing the big role here? The Media.

They've covered everything from the color of the blood-stained bedsheet, called all the people on the call-lists of the victim and the accused, brought people to the studio to analyse things, and what not.

One could say a lot of things here. Like how so many others are murdered and left to die, of how the local police did not follow up the Nithari case. It was only the tales of debauchery and cannibalism that brought that case to the fore.

So what's up here? Is there something to learn out of it? Well, me thinks there is. Let's have a look at the Missing White Woman Syndrome. It isn't rocket science. It just says that the media gives disproportionate attention to victims of a specific age, race and gender. There's nothing they wouldn't do to cover such a crime.

You could be sure that things haven't really been the same these last few days. You don't have the CBI coming in for a teen murder. This isn't the US where the FBI cracks everything from drug cartels to well- publicized cases of missing white women. Get the drift?

There was another case of a servant drugging a family in Noida, and killing one family member, a middle-class, middle-aged lady. The case is almost dead before you can say Tez.

I rest my case. For you to ponder.
Aaj Tak Aarushi Aarushi Murder Case Media Coverage

August 28, 2008
For the short period that R69 has been here, we've wondered what exactly is our mandate? For us its simple, to bring across what no one's talking about. The web being what it is, everyone has a point of view. What we bring to you is our take on both events that occur as we speak, and people's take on long-standing principles of m(ass) media, marketing and all other disciplines remotely related. Yes, even psychology would make an appearance in due time. For today, enjoy this vintage cadbury's ad, which is like no other you've ever seen. Its in the Air!
Read more